Most of the fabrics discussed in this article are textured fabrics that are woven on a jacquard loom with extra sets of yarns. However, each type of fabric has its own unique characteristics, so in this section we hope to demystify the terms and clear up some confusion. The meaning of some of these terms has broadened over time due to common usage in the industry. As technology progresses terms that once meant one thing now might have a wider definition as well. It can be quite confusing, so we offer this brief glossary: 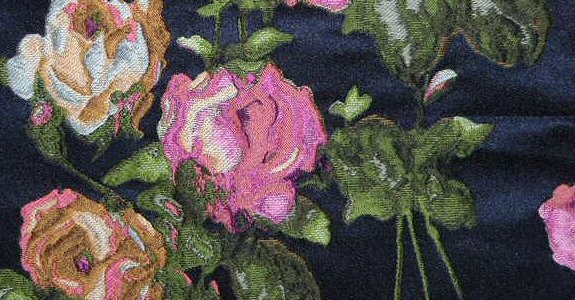 Brocade has a slightly raised, embroidered appearance. Its rich and elaborate design is often created with the use of metallic threads mixed with non-metallic. The design threads are typically a satin weave sitting on a background of satin, plain, twill or ribbed weave. Designs can range from florals or scrollwork to graphics, abstracts, geometrics and more. The fabric can be reversible depending on how long the satin float threads are. "Brocade" has also come to be a much more general umbrella term that is used commonly in the industry to describe all sorts of jacquards, damasks, tapestries, matelassé, etc. 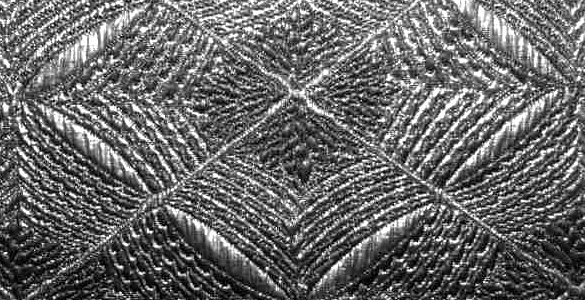 Cloqué is the French term for blister. This fabric has a raised texture and no backing layer. It is often made from silk but we now see it sometimes mixed with other fibers such as acetate and polyester that hold the design very well. This fabric is usually embossed to form the texture whereas matelassé is woven to form the texture. 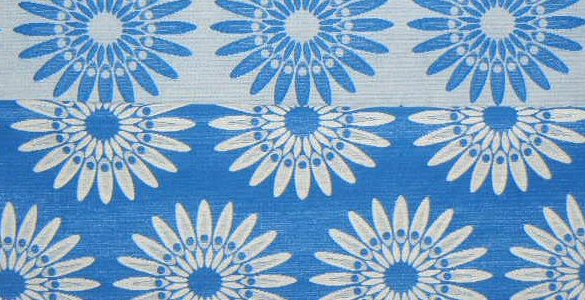 Damask is woven on a jacquard loom (see jacquard definition) and is a reversible fabric. The surface design runs in the opposite direction on the alternate side of the fabric. It is often made in a satin or twill weave on a plain, rib or sateen background. Linen tablecloths are often woven as damask. Damask fabrics are often called jacquards in common usage.

Jacquard fabric is woven on a jacquard loom, which was invented by Joseph Marie Jacquard in 1801. The loom is operated with a series of punch cards. The fabric is richly patterned, either with a variety of colored yarns, or as tone on tone. Some of the fabrics have their own names such as brocade, tapestry or matelassé but others without a specific name are simply called jacquard fabrics. Many jacquard fabrics are reversible with the colors or pattern reversed on the opposite side. One side of the fabric may have more of a lustre, while the other side will appear more matte. Jacquard fabric may also be knitted in which case it would be referred to as a jacquard knit. 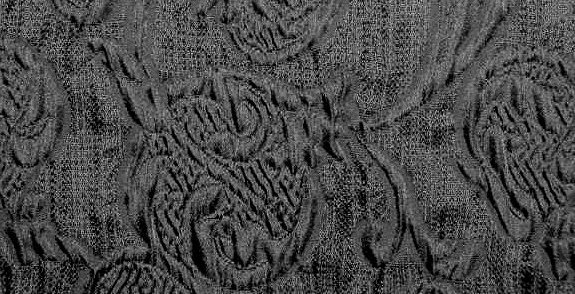 Matelassé has a raised, puffy, quilted texture. It is produced on a jacquard loom and woven as a doublecloth. On the wrong side of the fabric you can see the weft yarns, which appear to be tighter, pulling in the face yarns giving the raised effect. The front and back are actually separate fabrics, which are woven together with a third set of crepe yarns. The crepe yarns shrink during finishing, giving the fabric its raised texture. The raised texture will not be lost with wear or pressing, and the fabric is not reversible. 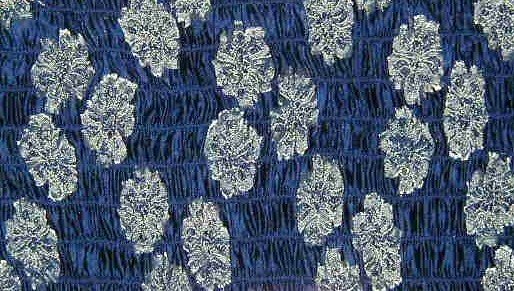 Plissé, which is the French term for "pleated", is often confused with matelassé or cloqué, but it is much lighter in weight and constructed using a different process. The texture of plissé is obtained using caustic soda and rollers. The pattern can be flattened with laundering, heat and pressing. Plissé was in the past often made from cotton and cotton blends, but the term has broadened to include eveningwear fabrics that have a tiny pleated texture. 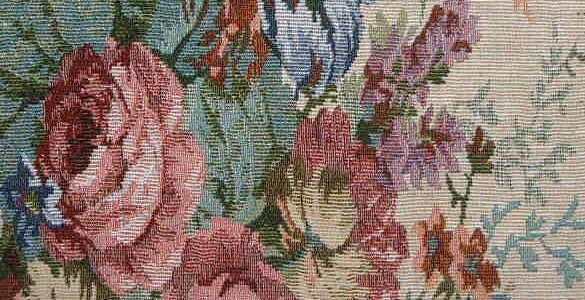 Tapestry is a firmer, sometimes heavier fabric. It originated as tapestry wall hangings, which depicted elaborate scenes, religious images or intricate patterns. Tapestries that are used in fashion often portray elaborate designs or florals with a vintage look. The patterning is created using the weft yarns, and it is not usually used as a reversible fabric.